Setting Up Lights for an Evening Interview

This year, we have been collaborating with adventure photographer Daniel Woods on a few of his underwater fashion shoots. Recently, we got the chance to interview him about his underwater photography projects and how he uses the FoxFury Nomad Production Lights to make his ideas come to life.

We set up the interview in the La Jolla Shores State Beach public parking lot near where Daniel was finishing up a beach sunset portrait shoot. Due to Daniel’s busy schedule, we needed to shoot the interview at night, which was the perfect opportunity to use the FoxFury Nomad Production Lights that Daniel was going to talk about. The FoxFury crew consisted of one videographer and an interviewer, so there was not a lot of available help for set up and tear down.

First light up and the last light down

We arrived after sunset and it was already getting dark as we started to set up. The Nomads can be deployed in 20 seconds each, so all of the lights for the shoot were deployed in five minutes.

The first light we pulled out was the Nomad T56, which illuminated the back of the car and the prep area. Once all the equipment was set up, we easily walked our lights across the parking lot to where the van was parked and staged our interview.

Daniel travels all over the Western United States for his photography and video shoots. A foundation of his business is his large, grey Sprinter van named Monstro. The van is set up with everything he needs to travel, shoot, edit, and even sleep on the road. We parked the van in the middle of the parking lot and started lighting everything up.

If there had been power outlets in the vicinity, we would have needed to run cables all the way across the parking lot. Besides being very inconvenient, the cables could have been a tripping hazard to people walking around the area. The other option with conventional lighting would be to use a generator. That would have introduced the issue of noise, making it harder to get quiet, clean audio. The battery powered Production Lights gave us SILENT lighting in a convenient cordless package.

Daniel was seated just inside the sliding van door with his one of his photos displayed on a monitor in the background. The key light was a Nomad P56 with a 2x2’ softbox placed about 6’ from Daniel. A Nomad P56 with a 2x2’ softbox was deployed inside the back of the van for rim lighting. Our compact Nomad N56 lights were placed on the ground behind the van to light up a palm tree and create some illumination under the vehicle. Lastly, a Nomad T56 was placed off the rear of the van to light up the van itself. A total of three cameras and five lights were used for this interview.

The same lights that are used for video production can be used for setup and teardown. The whole interview shoot took about 2.5 hours - 45 minutes to prep equipment, completely stage the set, set the lights and camera, and configure audio. The interview lasted about 90 minutes, and we wrapped everything in 20 minutes. The Nomad T56 was the last light that we used for wrapping. A quick 15 second breakdown of the light and we were driving away. The three hour runtime on the lights gave us plenty of time to work and not worry about the lights failing halfway through the interview.

The interview site was in the middle of a parking lot with no access to power outlets.

Overhead diagram of the lighting set up. 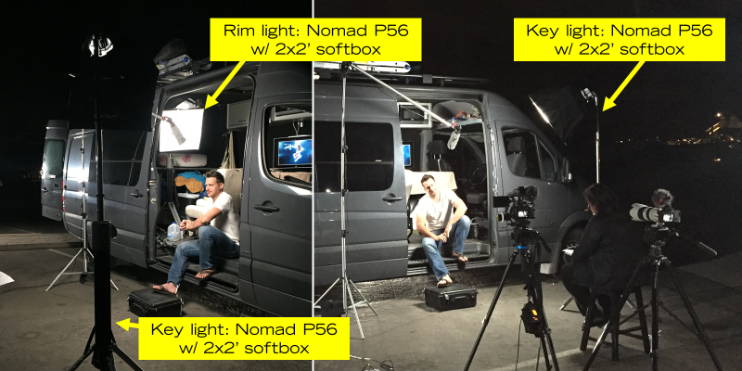 Actual lighting set up of the shoot with subject sitting inside the door of the van. 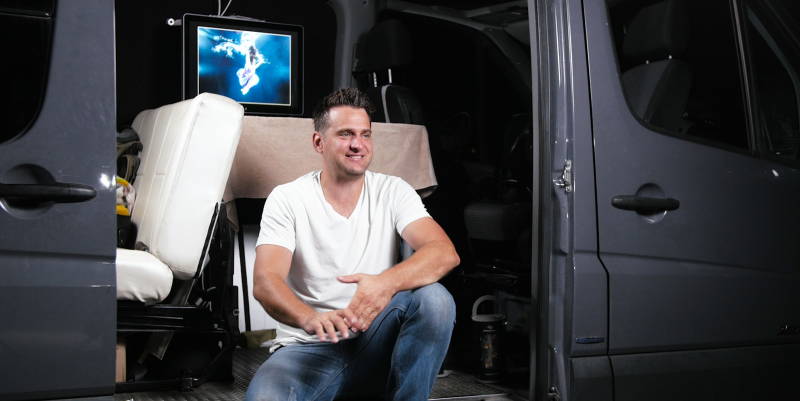 A camera still showing the end results of the lighting. 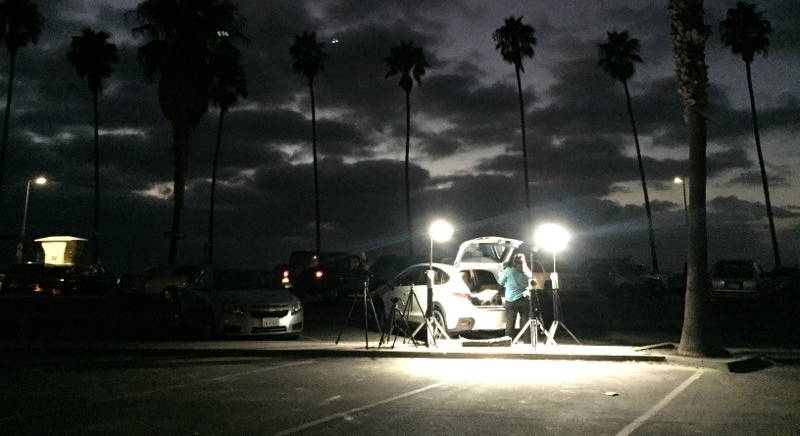 The video crew used the Nomad Production Lights during tear down once the interview was complete.

Interviews are an essential element of any video team’s workload. This interview with Daniel Woods provided the perfect opportunity to use the Nomad Production Lights outside of the typical boardroom interview setting. This shoot tested the versatility of the Nomad lights on a remote location shoot, and they passed with flying colors.

The only thing that wasn't tested in this interview is the lights' ability to stand up to water. However, we have used these lights in several underwater photo shoots with Daniel by completely submersing them in a pool, and we had no issues with them.

All in all, it was a very successful shoot. We got our content, everything was done in a timely manner, and the whole shoot was relatively stress free. The Nomad Production Lights simply made our job easy.

Watch the full interview with Daniel Woods below.